The CME Bitstream 3x Super MIDI controller has now been tested under the Windows 7 Operating System.

CME have confirmed that trials have been successfully carried out.

Bitstream 3x is a totally unique programmable MIDI controller with 35 knobs, eight sliders, 16 buttons, a joystick, a crossfader and a ribbon controller, the Bitstream 3X is the only 3-axis (X, Y, and Z) controller. You'll have total hands-on control of your DAW software and MIDI hardware.

Sontronics are distributed by Sonic8 in Benelux where their popularity is growing and growing.

"It's been a great year for Sontronics," says Sontronics founder, designer and MD Trevor Coley, "and we've seen fantastic growth, The brand is getting more recognition all round the world thanks to great support from our worldwide distributors and from the MI press."

After five years of success, Sontronics continues to grow with the release of 5 new products: 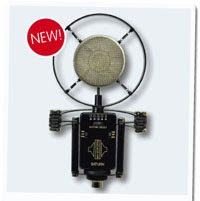 Like all of Sontronics' microphones, they have been designed and developed in the UK and, unlike many NAMM announcements, they'll all be in the shops within a couple of months.

"SATURN is the big news and it certainly turned plenty of heads at the NAMM Show," says Trevor. "It's inspired by the classic vocal mics of the 1940s and 50s, and while I originally designed it for vocals, it actually gives brilliant results on anything you put it in front of. It's been road-tested over the last year by various artists, producers and educators including Flood and Alan Moulder, and everyone's said it's an incredible all-rounder."

The other new mics are inspired by two Sontronics best-sellers, the STC-1 pencil condenser and STC-2 large-diaphragm condenser. "These continue to be popular," begins Trevor, "but we wanted to create something even more affordable. The STC-10 and STC-20 give users the first-class sound reproduction and top-quality build they associate with Sontronics products combined with a realistic price they can afford.
"At the same time I also wanted to push the potential of STC-2 so we've created the STC-2X featuring cardioid AND omnidirectional polar patterns plus a two-stage pad (-10/-20dB) and a two-stage filter (75/150Hz)." Available in silver or black, the STC-2X comes with a shockmount in an aluminium flightcase.

Sontronics has also released a four-pack of its most popular mic, the STC-80 dynamic. "We found that many users were buying four or five STC-80s to use for vocals and guitar amps on stage and in the studio," explains Trevor, "so to save people carrying four flightcases around, we now do a set of four STC-80s in a single flightcase with an extra saving on the full price."

Finally, Sontronics has launched the ST-PAD/PHASE switch. "We know some people using our ribbon mics have needed an attentuation control when miking very loud sound sources, especially if they don't have the feature on a desk or audio interface. The ST-PAD/PHASE is an inline switch with two -10dB attenuation/pad controls (giving a total of -20dB) plus a 180° phase invert control, useful for dual-miking snare drums.

Five years of success and five new products (with more to come later in the year) all add up to being a fantastic year for the British mic brand that everyone's talking about!
Posted by Sonic8 at 11:13 No comments:

New Features include:
Wave machine labs have also announced a brand new iPhone app, Voice Band.  This cool app lets you create entire songs with only your voice (guitar, bass, synth, drums and more).  It features innovative pitch and timing extraction algorithms which turn your voice into a musical instrument in real time.  Just sing a melody to create a song!

A built-in recorder lets you create songs one instrument at a time. Voice Band works in real time as you sing, and includes ten instruments: two electric guitars, bass, saxophone, two synthesizers, organ and drums.  Voice Band also allows you to jam along with your favorite tunes in your iPod library.

Voice Band is especially powerful as a song writing aid, allowing musicians to sing song ideas directly into the phone and hear those ideas come alive as real instruments.

Fxpansion have just announced that they'll be releasing BFD Nano in the near future..

An easy but powerful software instrument for acoustic drums


BFD Nano is a streamlined, fun and affordable software instrument for acoustic drums, based on the award-winning BFD2 engine. Optimized for flexibility and power while being incredibly easy to use, BFD Nano is provided with an extensive built-in library of drum sounds and patterns, and is also compatible with the wide range of FXpansion and 3rd-party add-on expansions.


BFD Nano gives you easy access to the some of the best sounds in the BFD2 library, recorded at London's Air Studios. The included sounds are full of dramatic levels of detail and mojo... Anything but sterile, BFD Nano is imbued with a musical character that sets it apart from the homogenized, flat sounds found elsewhere.


Included are over 40 presets that showcase BFD Nano's powerful, punchy-sounding mixing section. The EQ and dynamics/effect processing allow you to sculpt the raw sounds and lush stereo ambience for any situation. DCAM circuit-modelled compression, filtering and drive provide hardware-style tone and grit, while Overloud's Breverb plate algorithm can be used for artificial reverb effects.


BFD Nano also contains a Groove section containing over 1500 drum patterns to drag into your DAW, or to sequence on the built-in Drum Track. Preview patterns in sync with your project and use the humanization effects to adjust the feel to your needs. You can even export a stereo mixdown from the Groove engine - ideal for loops and breakbeats.


Other advanced features that set BFD Nano apart from the competition are its customizable keymapping, electronic drum support, the ability to combine kit-pieces from different expansion libraries, and an interface perfectly balanced between ease of use and powerful flexibility. BFD Nano also can be upgraded to BFD2 - both are fully preset-compatible to enable a seamless transition.

This looks like it's going to be a great addition to an already strong line-up... Nice one guys, keep up the good work!


More info on this can be found at www.fxpansion.com

Just in case you're at the NAMM show this week here's where you'll find our brands exhibiting:
You never know you might even meet us as we'll be visiting these stands over the next few days.

Sonic8 off to NAMM

Representives from Sonic8 UK&I, Benelux and DACH will be at the NAMM show this week... Do say hi if you see us there.
Posted by Sonic8 at 13:40 No comments: